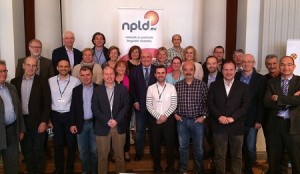 The Chair will be accompanied by the two Vice-chairs of NPLD, Sabrina Rasom, from the Ladin language community in the Fassa Valley (Italy), and Alex Riemersma, from the Frisian language community in Friesland (the Netherlands). They will be presenting to the Commissioner the NPLD’s Roadmap for Linguistic Diversity, a consensus document elaborated by 14 State and regional governments with minority language communities, universities and associations from across Europe. The Roadmap is a practical proposal with concrete policy actions on multilingualism addressed to the EU institutions, which adopts an inclusive approach to multilingualism beyond the 24 EU official languages.

The Chair and Vice-chairs will also give an overview of the different initiatives being currently developed across many regional language communities to link their language communities and regions with the European Commission’s priorities on growth, competitiveness and job creation. Examples include the recent study “The Value and Economic Impact of Basque”, promoted by the Basque Government, or the “Economic Benefits associated with the Irish Language which accrue to Galway City”, among many others.